Dutch explorer Willem Barentsz explored the seas around the Northern tip of Norway three times, looking for the infamous northern passage to Asia. On his third journey, in 1596, he stranded in heavy sea ice on the barren island of Nova Zembla, where he ultimately perished after spending the winter in the famous ‘Behouden Huys’, made of the wreckage of his ship in 1597. In an urge to relive some of the crew’s endurance, a small Dutch expedition ventured out to Kirkenes in Northern Norway, to see the part of the Arctic Ocean named after our national 16th century hero, in the middle of the Arctic winter.

On March 9, 2012 we fly from Amsterdam via Oslo to the small fishing village of Kirkenes, near the Norwegian-Russian border. Literally the corner of Europe, as the great Norwegian coastal road leading East from Kirkenes ends at the border, leading only further to Murmansk in Russia. From the airport we travel to the Vinni peninsula, just east of Kirkenes. When the taxi van drops us on the side of the road at the agreed GPS location it is already dark. We put on our snowshoes and switch on our headlights as we head further up into the dark hills. There are one or two small houses along the road, and behind those there is only wilderness. The small peninsula is surrounded by the Barents Sea. Tomorrow we will climb one of the highest summits in the area, from where we should have a great view on the ocean, that from here stretches all the way to the North Pole and beyond. 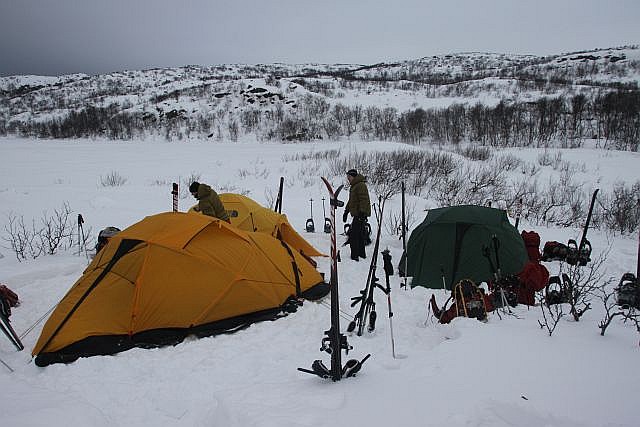 It is a quiet night and temperatures are not too low for this time of the year. In the morning we are greeted by clouded skies and a bit of wind. We pack up camp for our attempt to climb to the summit of Øretoppen Mountain, at 465 meters the highest point of the Arctic plains in this area. 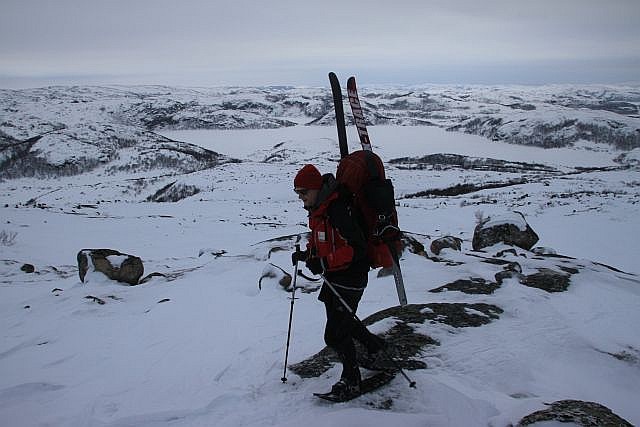 In preparation for the landscape we brought both ski’s and snowshoes. For the cold climb we put on our snowshoes, carrying our ski’s on our backpack.

It is a long slope, leading to a windy ridge just under the summit. We carry our heavy packs to the ridge and leave them behind for the last stretch to the top.

The sign points to the last very steep 20 meters to the 465 meter high summit. Not a difficult climb technically, but gale force winds make it strenuous nevertheless and the wind chill is significant.

Wearing all protective gear that we have, we sign the summit book, one of the northernmost in Europe, if not the world! Unfortunately a powerful snow storm blocks most of the view. 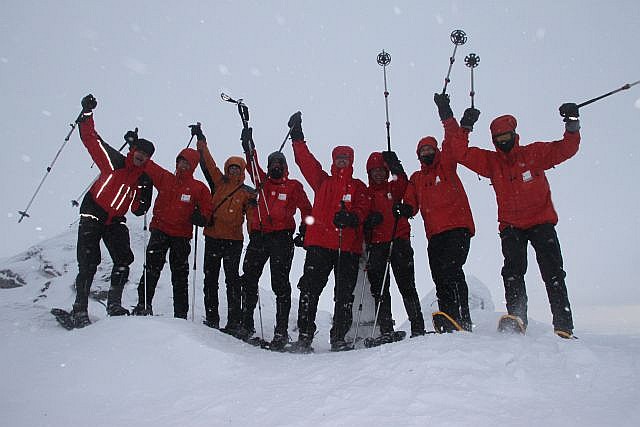 The full expedition team on the summit! Always a cold, but happy moment.

But as in a miracle suddenly the clouds open up, revealing a burst of sunlight on the Barents Sea in the distance. We see ships anchored in the protective fjord. This is where Willem Barents sailed around the North Cape, on his way to Nova Zembla over 400 years ago!

After our successful climb we return to the ridge to pick up our backpacks. From here we traverse the hilly Arctic Plain towards the Russian border, south of here. Our end goal is the Sollia Hotel, about three days hiking and skiing from here.

Clear proof that we are in the Arctic corner of Europe. 69.8 degrees North, 30.2 degrees East.

At the end of day two we set up camp on the edge of a large lake. We drill a hole in the 1-meter thick ice to try ice fishing. We don’t really catch anything, but the effort keeps us nice and warm. 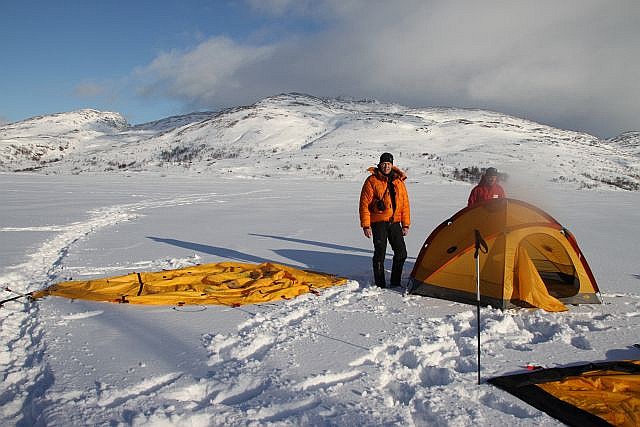 The next morning we are greeted by the sun and clear skies. A beautiful day for a cross country ski trip over the lakes. 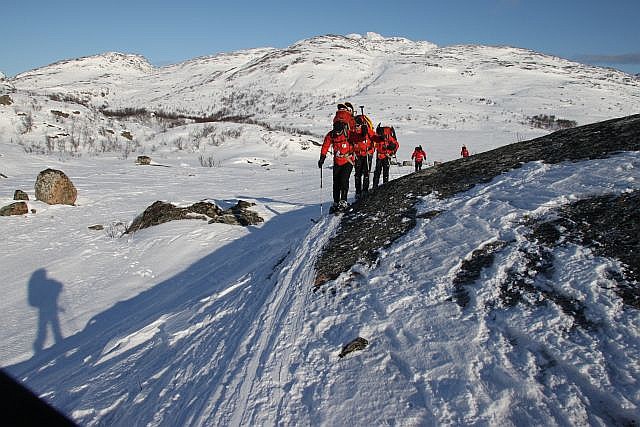 As we cross one of many ridges between the lakes, we still see the summit of Øretoppen Mountain in the distance behind us. 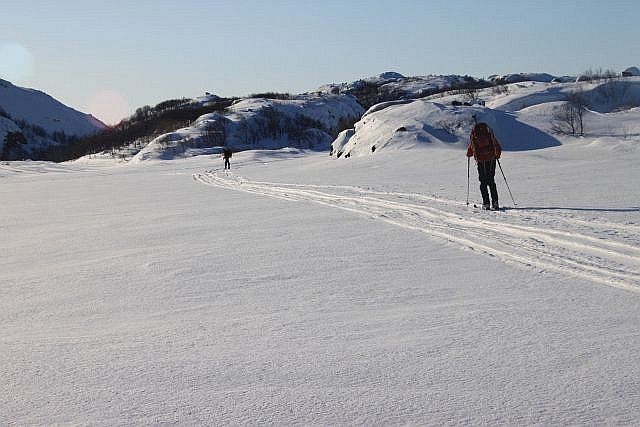 At the end of the day we find a beautiful camp spot on the edge of a long lake, underneath a small ridge to protect us from the wind. Again we will sleep on the ice of the lake, offering a good flat pitch for our tents. 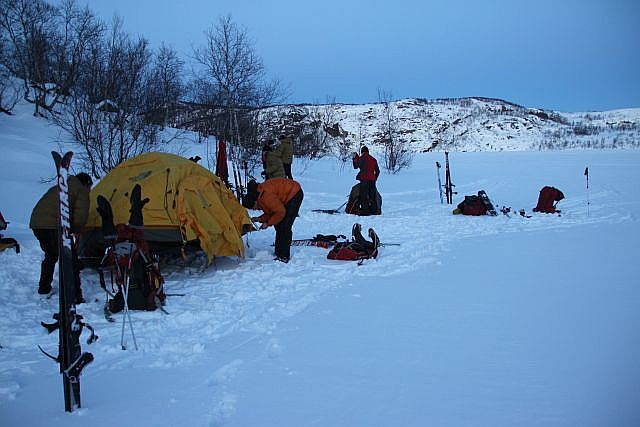 The sun disappears over the hills when we finish setting up our expedition camp for the night.

Later that evening we are treated to beautiful Aurora Borealis over our remote winter camp. This is definitely one of the most mystical elements of winter camping in the North!

Impossible to catch on camera, green and red curtains of light silently wave above our heads, over 150 kilometers high. The total silence of the lightshow adds to the awe of the experience. 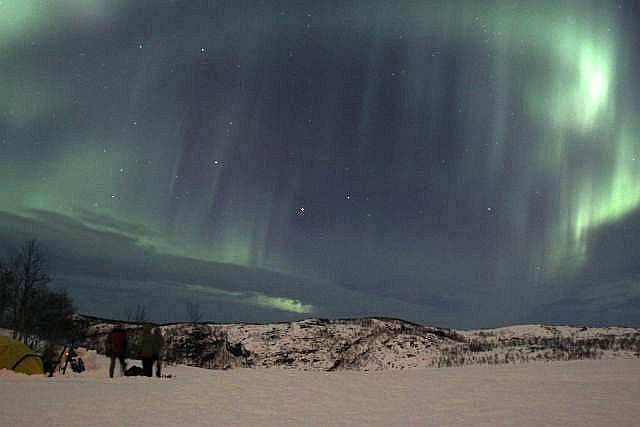 The Aurora Borealis appears in many shapes and forms, captivating the attention for hours, until it gets too cold to just stand motionless. 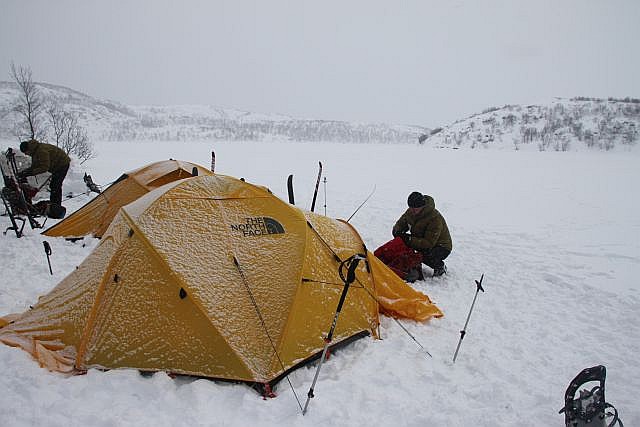 The next morning it is clouded again and there is even some snow on our tents. We get ready for the home straight.

Using GPS, compass and detailed maps, navigating is not too hard. But don’t underestimate the winter landscape, where features indicated on the map disappear under the snow, making it much more difficult to find your way than in summer. 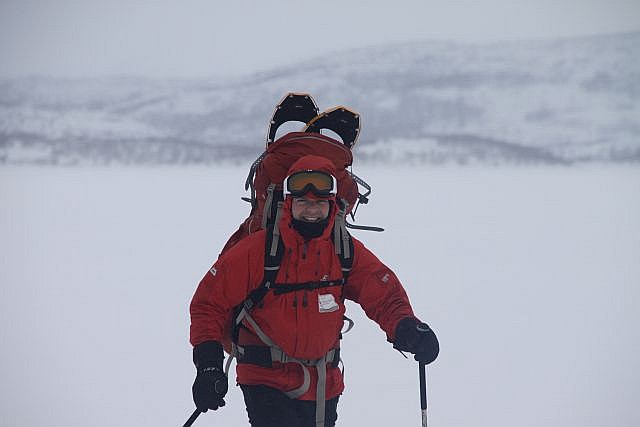 In a few hours we reach the end of the lake, from where we cross one last ridge to the road. It stays hazy all day, and temperatures climb to zero degrees. Almost balmy for this time of year in this region!

When we spot dog teams we know that civilization cannot be far away!

Well before dark we reach the cosy small Sollia Gjestegard Hotel and Bungalows. 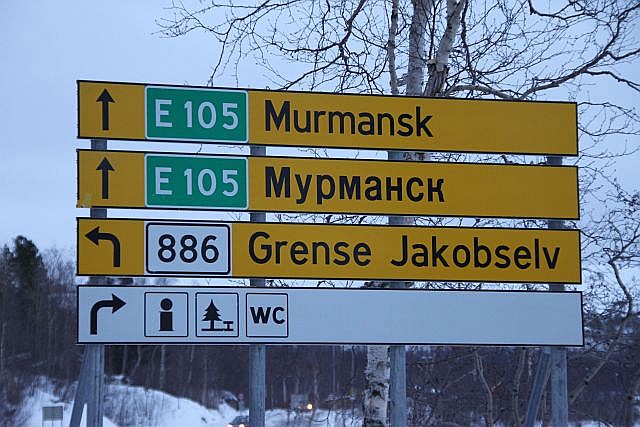 The hotel is only meters from the well-guarded Russian border, which runs accross the lake in front of the hotel.

How easy is it to cross this border, only marked by signs in the ice on the lake. But don’t be fooled. Border guards have spotted you well before you reach these signs. Crossing the invisible line is a major offense and gets you into a lot of trouble! We stay on the European side… 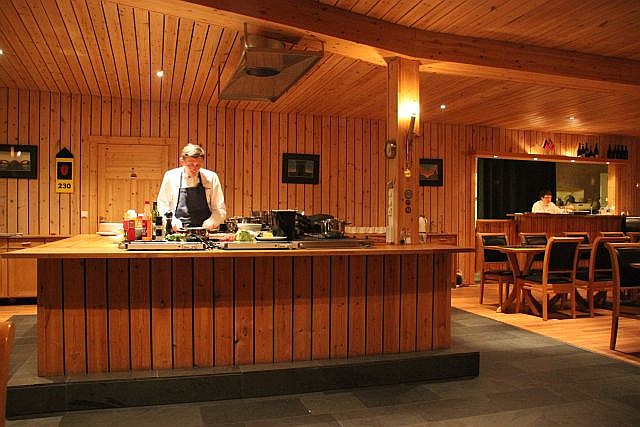 The Sollia Gjestegard Hotel has a great restaurant on the edge of the lake. Restaurant ‘Gapahuken’ serves local specialities like reindeer, snow crab and whale, accompanied by the best European wines. The hotel owner is a great chef! This place is highly recommended for both the food, hospitality and the views.

We let the chef prepare a selection of local dishes, like this preparation of whale for a starter. One of the few countries where you can legally (but perhaps not ethically?) eat whale.

The next morning we catch a last glimpse of the Barents Sea, as we pass the fjords on the way to the airport. 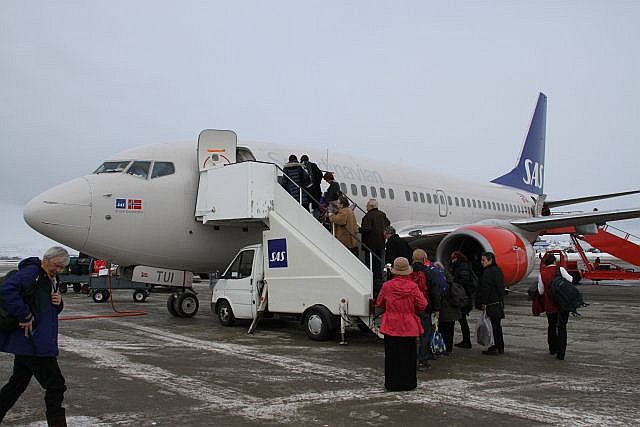 Scandinavian Airlines is well prepared for Arctic conditions, so we depart nicely on time for a 6-hour trip back to Amsterdam, via Oslo.

Practical information: Kirkenes is one of the northernmost towns in Norway, easily reached by SAS Scandinavian Airlines and Norwegian, connecting through Oslo. It is also the end point of the famous Hurtigruten, the old mail boat line, now converted into a leading coastal cruiseline. The town itself is not very interesting, being a small industrial and local fishing port. The greater area basically consists of the Arctic wilderness, with the nearest other large towns hundreds of kilometers away.

The trip as described should only be undertaken by well experienced expedition teams, with the right knowledge and the correct gear. Venturing out unprepared in this part of the world is very dangerous and should not be taken lightly. That said, there are several companies that organize great tours in the wilderness. The Sollia Gjestegard in Storskog, at about 10 kilometers from Kirkenes, is well recommended. They organize dog sled excursions, as well as van and snowmobile tours in the area. The family-run hotel boasts several hotel rooms, as well as comfortable bungalows. The Gapahuken restaurant can be considered one of the best in Lapland for local specialities.