I blame this shipmodel on board the DFDS ‘Princess Seaways’. I saw it at the deck 6 lounge of this modern ferry a few weeks ago. It is a scale model of the “Prince of Scandinavia”, a 1975-built ferry that sailed for DFDS Seaways from 1981 to 2003. One of my oldest childhood holiday memories is of this ship, which was originally registered as MS ‘Tor Britannia’, sailing for Tor Line in 1979. I still have a postcard that I got on board that ship, as an eight year old kid.

My early childhood ferry experiences sparked a long-term love for sea travel. Sea crossings have been a frequent element of my European trips ever since. I have passed this experience to my own kids too by now. Of course a lot has changed in 40 years. A personal history: 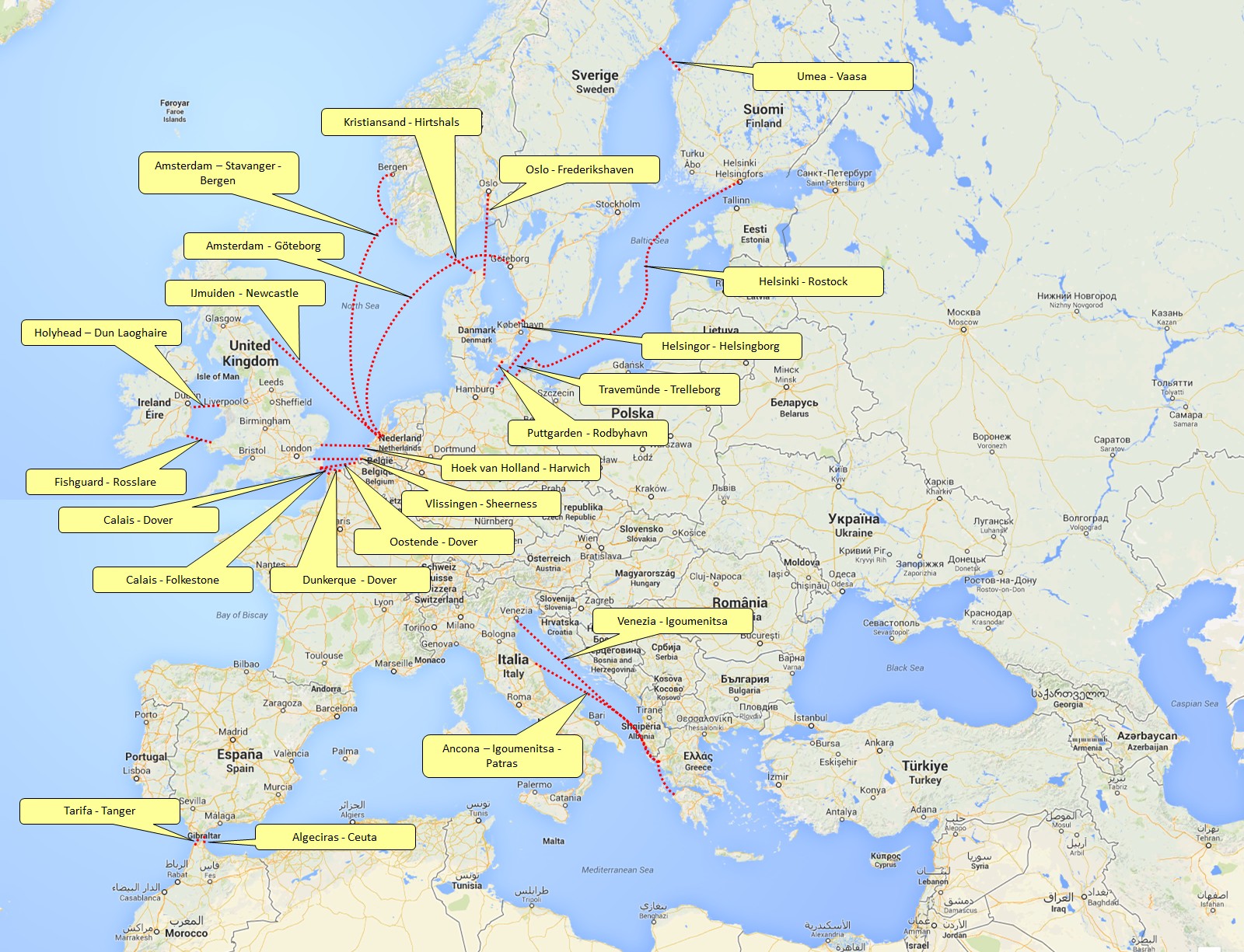 Between my first ferry experience in 1976 and my minicruise to Newcastle in 2014, I have crossed almost all European seas by ferries of all sorts. I have travelled some of these lines on the map many times. I have covered more distance on ships than many cruise passengers…

My first ferry ride was in 1976. I was five years old. I have only vague memories, but I remember the ship well. A two-night trip from Amsterdam, via Stavanger to Bergen in Norway. We went on a camping trip to Norway with our car and caravan, on board 1966-built MS ‘Jupiter’ of the Norwegian Fred Olsen Bergen Line. An interesting ship, used as a ferry in summer, while sailing as a cruiseliner in the Mediterranean in winter, under a different name.

My mother, my little brother and 5-year old me, watching our ship during a short stop in Stavanger in July 1976.

My next ferry adventure was on long defunct Swedish TT-Linie, sailing between Travemünde and Trelleborg. I was seven years old. Old enough to feel the excitement (and my dad’s anxiety) of sailing past the Iron Curtain between Germany and the German Democratic Republic. Travemünde was the last port of the western world. The trip to Sweden was on MS ‘Nils Holgersson’, where we were sitting on the sunny deck for the 6 or 7 hour crossing to Sweden. On the way back we sailed on its sister ship MS ‘Peter Pan’.

Swedish ferry and freight operator Tor Line changed the European ferry business forever in the late 1970’s, when it put 1975-built MS ‘Tor Britannia’, and a year later its sister ship ‘Tor Scandinavia’, into service. Designed with the comfort of the ferry passenger in mind, these ships became the new standard in sea crossings. They were the first ferries with on board shopping, multiple restaurants and live entertainment. The cabins were designed by interior designers, applying the latest 1970’s fashionable bright colors like green, brown and orange.

Getting on board Tor Britannia at the Coenhaven terminal in Amsterdam, for the overnight crossing to Göteborg in Sweden. 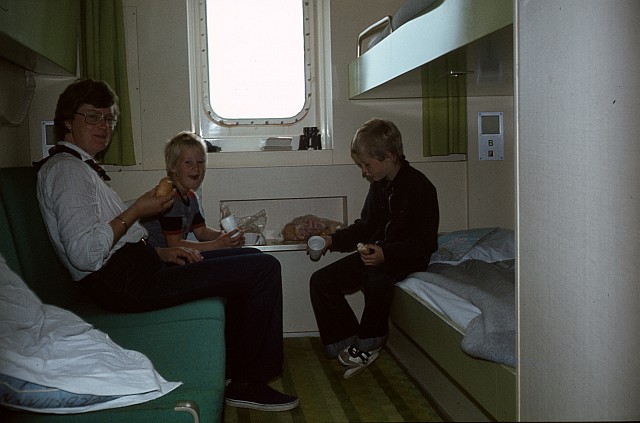 My mother, brother and me in our 4-berth outside cabin on Tor Britannia. Looks normal for 2014 standards, but this was definitely something new in 1979! Please note: Dutch tourists always bring their own sandwiches… 😉

My next memorable ferry experience came in 1989, when I travelled to the UK for the first time. To add some excitement to the trip (and because it was cheap), we crossed the channel by hovercraft.

Between 1989 and 1991 I crossed the channel by the spectacular hovercrafts several times. In those days Hoverspeed offered a fast coach connection between Amsterdam/Utrecht and London, via the hoverports in Calais and Dover. Of course it was the brute force of the loud machines that attracted me, more than anything else. The company operated six British Hovercraft Corporation-built Mark III SR.N4 hovercrafts on this route, the largest ever built. The above ‘Swift’ was built in 1969 and remained in service until 1991. The last commercial hovercraft crossing over the English channel was in October 2000, after the company could no longer compete with the Channel Tunnel and other cheap ferry operators.

The 1972-built Mark III SR.N4 hovercraft ‘Sir Christopher’ at Dover hoverport in July 1990. Cars are waiting to get on, while arriving passengers are getting off.

Another fast new way to cross the channel was offered between 1997 and 2007. The high speed sea service (HSS) ‘Stena Discovery’ catamaran crossed the distance between Hoek van Holland and Harwich in England in 3 hours and 40 minutes, while offering the passengers all the comfort of the much slower car ferries. With two sailings per day England had never been so close, so I used it on several occasions. In 2007, well before the tourism sector started worrying about CO2 footprints, the vessel was taken out of service, due to the high fuel costs. It remains inoperable until today. 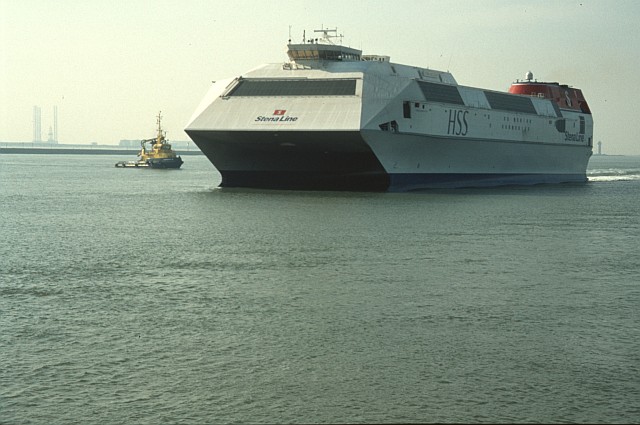 The brand new HSS Stena Discovery arriving at Hoek van Holland from one of its crossings from Harwich in the summer of 1997. 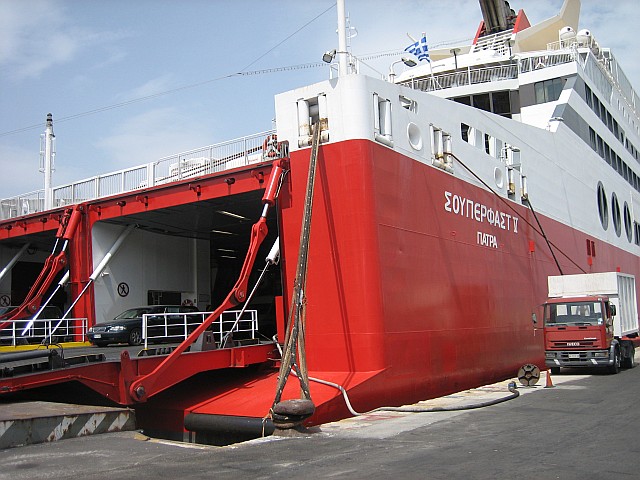 In 2007 I took my children to Greece. They were then about as old I was when my parents took me on my first ferry trip. To avoid the long drive over the Balkans, we drove to Ancona in Italy, where we boarded Superfast Ferries MS ‘Superfast V’ for the 26-hour trip to Patras in Greece, via Igoumenitsa.

The ships on the Italy to Greece routes are very luxurious, yet built to make the crossing as fast as possible. If ever the term ‘cruiseferry’ applies, it is on board these vessels. Of course the great Mediterranean weather and the views of the Italian coast and Greek islands adds to the holiday feel.

Travelling by ferry is great for kids! While they sleep, you cover a lot of distance. On board the Superfast ships (as well as on most other ferry lines) there is plenty to do and see for kids all ages.

A few years later I took my car to Greece again, now taking the even longer Venice to Igoumenitsa route, on Greek Minoan Lines. The luxurious MS ‘Europa Palace’ is what it says: a palace on the seas. Built for speed, but carrying all desirable comforts for its passengers.

And what better vantage point can you wish to watch Piazza San Marco in Venice glide by? The slow trip on the enormous ship along the city of Venice is alone worth the trip. And why not visit the city before departure or upon arrival back from Greece. I sure did!

My favorite route to Southern England nowadays is the efficient DFDS Dunkerque to Dover crossing. With sailings every 2 hours, around the clock, there is never a long wait. The port in Dunkerque is also a lot less crowded than the one in Calais and the ships are just fine for the 2-hour trip. With free on-board wifi you can even do some work. Don’t expect too much entertainment. This is roll-on roll-off. 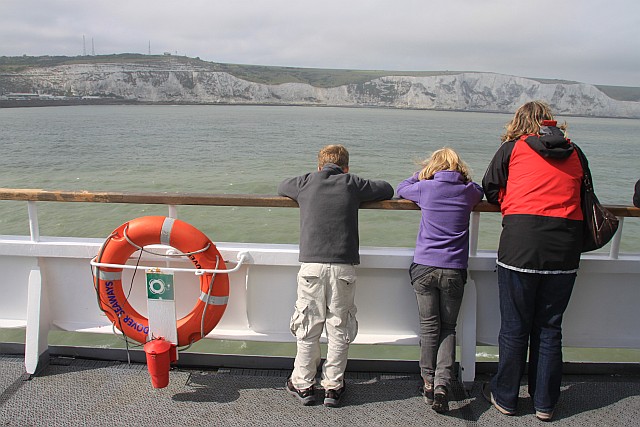 Every parent should show their kids the famous White Cliffs of Dover. The best way to see them is definitely from a ferry! Here is my proof that my kids have seen them 🙂

Just to show that not all ferries have converted into disguised cruise liners, here is the RG Line ferry that operates the icy waters of the Gulf of Bothnia between Umeå in Sweden and Vaasa in Finland. This 1983-built semi-freighter with the fancy name ‘RG1’ has very few facilities for its passengers, while sailing through the ice in this part of the world. The crossing takes almost 5 hours. 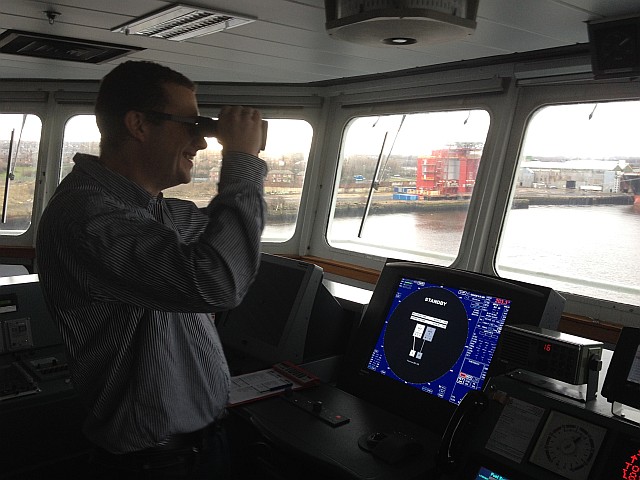 Thanks to DFDS Seaways and Travelbloggers.nl I close the story of my almost 40 years at sea with a highlight. As an invited guest we were allowed to travel on the bridge of MS ‘King Seaways’ to Newcastle. You should really read my special blog about that experience here.

In almost 40 years I crossed the waters of the European seas on many occassions, on many ferry lines, on many vessels. I really enjoy these short or longer journeys at sea as part of my holiday experience. Nevertheless, I haven’t taken the step to convert this concept into a full cruise experience yet. I guess this makes me one of the very few sea travel experts with zero cruise experience…

So which cruise company dares to invite this experienced sea traveller to blog about the difference? Or which ferry operator would like me to write about why their new vessel is a market-changer, just as Tor Britannia, Hoverspeed and the Channel Tunnel were in their times?