This could have been the title of a report of a German pilot in 1940. The thought crossed my mind several times, while watching Amsterdam city center from the lowest altitude I had ever seen it from a plane window. Of course I was thrilled when I received the invitation from Lufthansa to be on a VIP flight over Holland on board their oldest still flying aircraft, the 1936-built Junkers Ju-52. This plane has a very international history. Built in 1936 and operational in Germany, Norway, Ecuador and the US, until purchased by Lufthansa in 1984 and painstakingly restored. It is now used to showcase the old days of flying, to over 10,000 passengers a year.

The old days of flying were loud, noisy, shaky, smelly, cramped and slow. Nevertheless it is also totally romantic and adventurous. These planes made aviation into what it is today. It is a great privilege to experience flight as my grandparents had experienced it. Follow me on a virtual flight over Amsterdam, 1936-style: 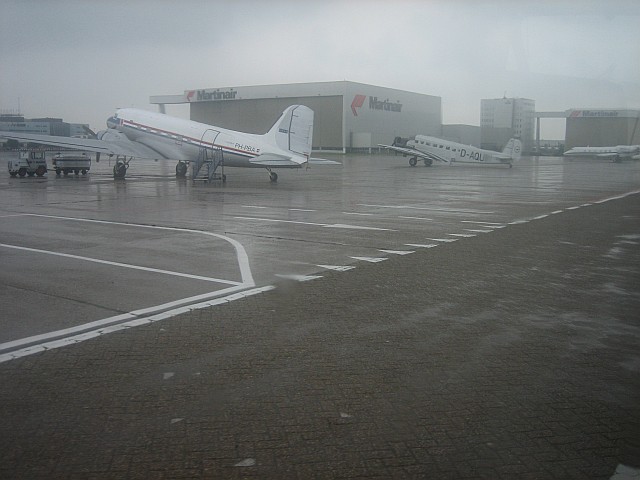 It is a grey day in August when I arrive at the general aviation area of Amsterdam Schiphol airport. Not the best day for flying, but the forecast is for better weather later in the day. The old Ju-52 is sitting next to its American counterpart, the 1944-built DC-3 Dakota PH-PBA, long owned and flown by Dutch Prince Bernhard, now owned by the Dutch Dakota Association. 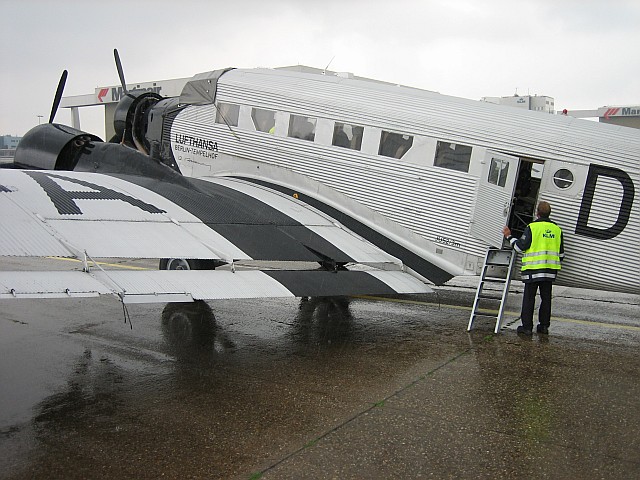 While the crew prepare the aircraft, I have lunch with the Amsterdam Lufthansa staff, that invited a few of their local frequent flyers to talk about improving Lufthansa service. Great to see how this airline involves its most loyal customers in its efforts to continuously improve the air travel experience. 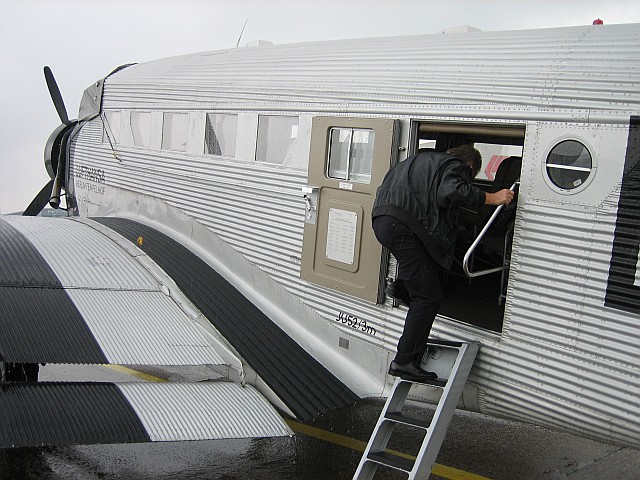 Getting on board the small historic airliner is not super easy, and some people definitely need a hand from the crew. 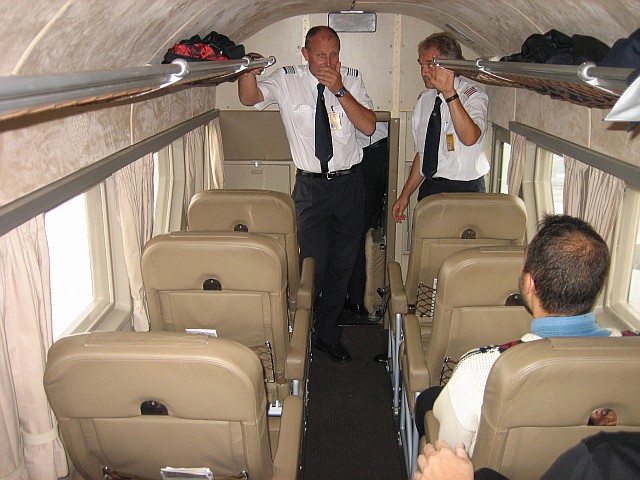 Once inside, the crew explains some of the features of the trimotor aircraft. The third pilot also acts as flight attendant before take off, explaining the safety features of this Junkers Ju-52/3M. Then he pushes himself into the cramped cockpit to help his colleagues start the engines. I guess there will be no coffee and sandwiches on this flight… 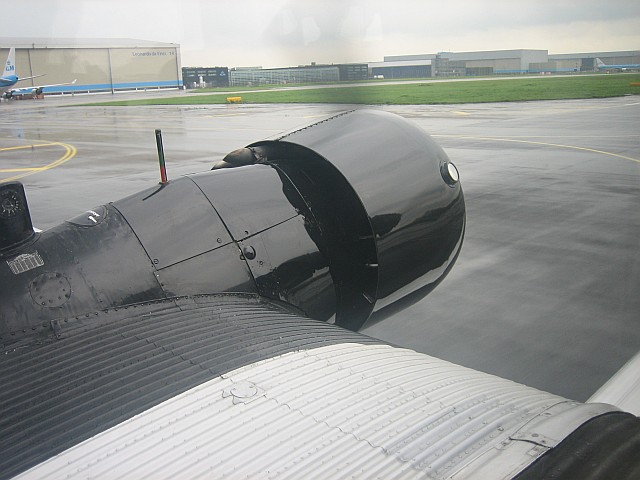 The three engines are started one by one. The thin aircraft walls hardly protect against the noise and vibrations. It is so loud that it is hard to talk to other passengers about the exciting experience. 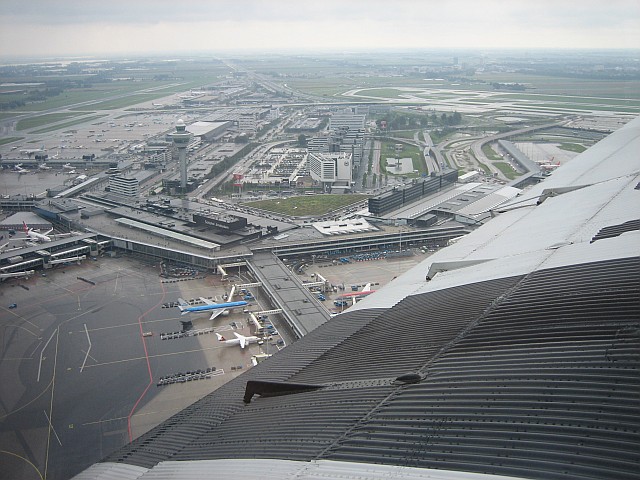 The take off is very smooth. Accelleration is slow and the plane doesn’t take off very steeply. In fact it is a strange sensation when the plane pulls straight before lift off, when the tailwheel lifts off the runway first. We get a great panorama of Schiphol Airport during the slow ascent. 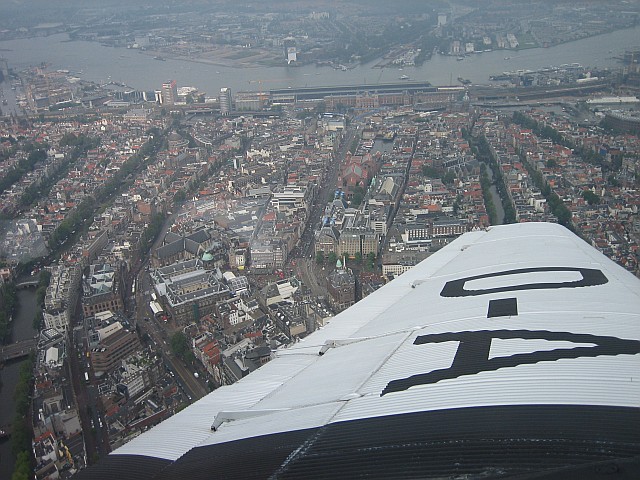 We fly over the airport and then straight to city center. The pilot has special permission to fly this close and this low over our capital city. We make a few slow turns over the canals and squares. Very visible to the people on the ground, I am sure. Can you spot Dam Square? 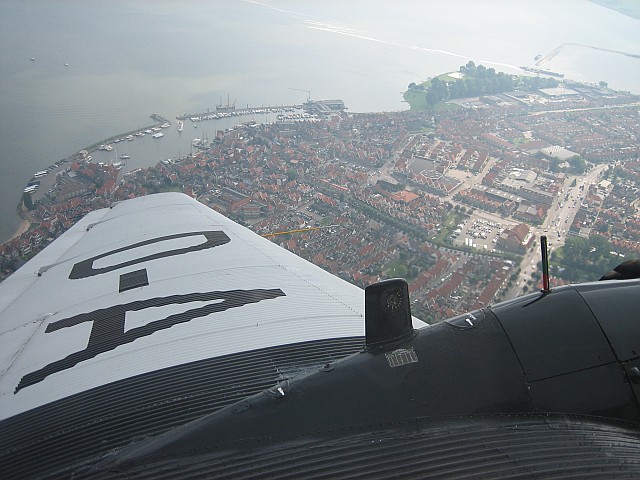 As a good tourist, we do more of the Amsterdam-area tourist traps. Here we fly a nice bank over the traditional fishing villages of Volendam and Marken, just north of Amsterdam. 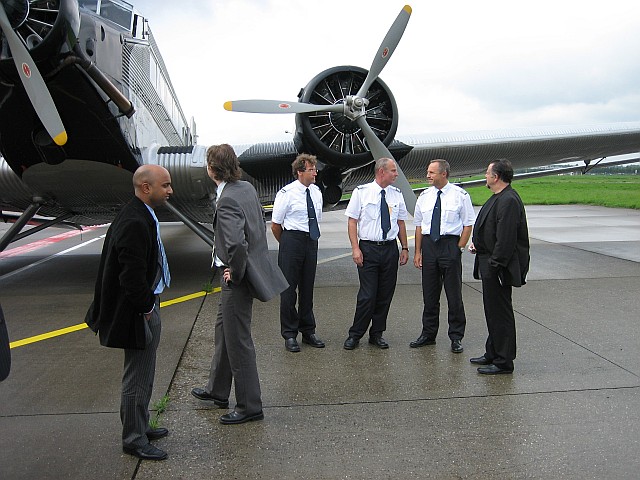 After a great 45-minute flight we safely land at Amsterdam airport again. When parked, we have plenty of time to further inspect the plane and chat with the German crew. All of them are great aviation enthusiasts, who spend most of their spare time maintaining and flying this historic aircraft. 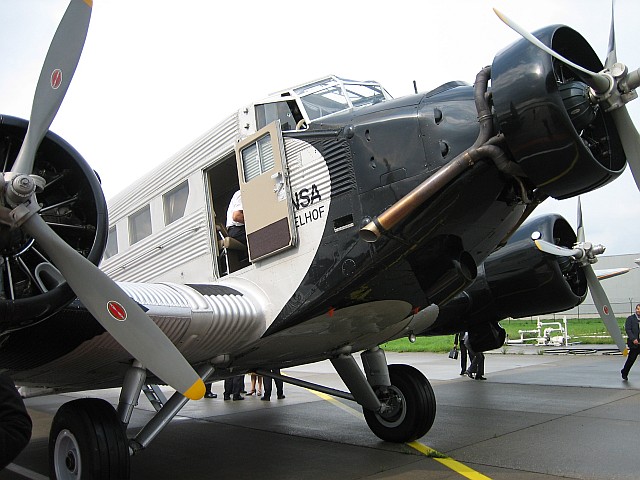 Only a few of these classic trimotors exist today, and even less of them still fly. This is for sure the oldest airworthy model. 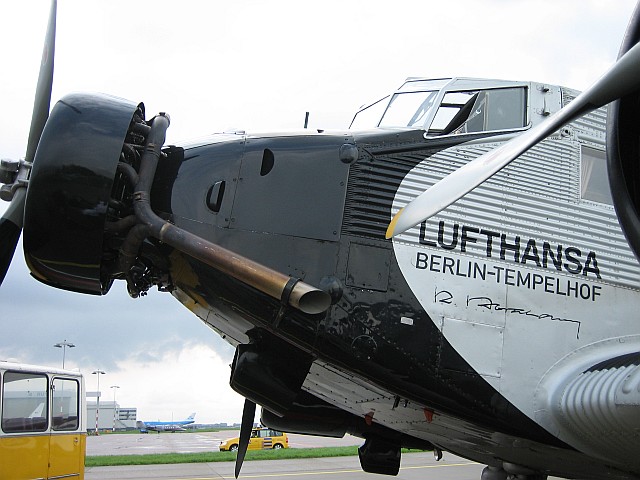 The Junkers 52/3M “Tante Ju”. Proudly kept in the air to preserve an important piece of aviation history (as quoted by the owner).

Although my flight took place in 2006, you can still buy tickets for round trip or ferry flights on this historic aircraft. It is owned and maintained by the Deutsche Lufthansa Berlin-Stiftung, who also sells tickets. Check out their website for details. On this same website you can learn about the interesting history of this particular aircraft. Did you know that it spent the first 20 years of its life as a seaplane? Check out its liveries over the years here.

My flight was by special invitation of Lufthansa, for a few of their frequent flyers in the Netherlands in August 2006. Thank you Lufthansa for this special treat! This blog represents my own opinion only.